Flight Services & Systems (FSS) was excited to welcome Silver Airways to our new Columbia Metropolitan Airport (CAE). The first flight was on December 17th and according to Palm Beach International Airport (PBI) General Manager Evian Medrano, the flight and operations couldn’t have gone smoother. Leading up to the startup, FSS spent a few weeks hiring and training our new employees to ensure things would go off without a hitch. Congratulations to our new CAE team!

We also welcomed Silver Airways to our new Jacksonville International Airport (JAX) location. The first flight was on December 21st and was led by new Operations Manager Freddy Medina. You can learn more about Freddy by clicking here. As with CAE, FSS spent a few weeks with our new hires to ensure that they were more than ready for the first flight. Congratulations to Freddy and our new JAX team! Welcome to Columbia and Jacksonville, Silver Airways!

Flight Services and Systems (FSS) would like to spotlight Compliance Manager Evian Medrano and General Manager Jimmy Dillard. During the Silver Airways startups at Charleston International Airport (CHS), Columbia Metropolitan Airport (CAE), and Jacksonville International Airport (JAX), they were instrumental to the success of these startups. Evian and Jimmy worked closely with the airports to ensure FSS was compliant with all airport rules, regulations, and guidelines. They also ensured our new employees were adequately trained and ready will before the first flights came in.

FSS would like to recognize our employees who have been with us throughout the years. Celebrating milestone anniversaries in December are: 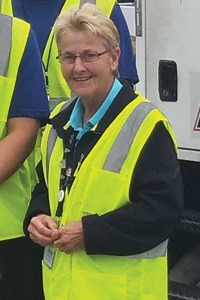 Sherrie joined the FSS team in May 2013 and has made several stops during her FSS career. She successfully and effectively ran our Charleston International Airport (CHS) operation. While at CHS, Sherrie oversaw the FSS operations for JetBlue Airways, Alaska Airlines, and Frontier Airlines. She also was a part of the startup for the first wide-body British Airways operation.

Her next stop was at our Indianapolis International Airport (IND) station. Upon her arrival, Sherrie turned a poor performing operation around and stabilized it. She also improved the station’s scorecard with Alaska Airlines. At the end of 2019, FSS scored a “D” with Alaska Airlines. By the end of the first quarter in 2020, Sherrie was able to raise the score to an “A”.

Sherrie proudly served in the U.S. Navy as a Quality Assurance and Safety Supervisor in the aviation sector. During her service, Sherrie obtained the right to bear three gold hash marks on her Star, three Navy Achievement Medals, and two Outstanding Sailor of the Quarter awards along with various oversea medals and Ad/Mat awards. 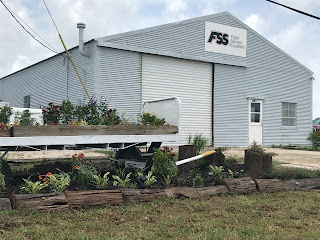 We are also announcing the hiring of our two mechanics, Travis Tate and Keith Hurst. Travis and Keith have the experience to repair, maintain, paint, and/or recondition any ground service equipment (GSE). They also have experience servicing industrial trucks, tractors, and other equipment like forklifts. 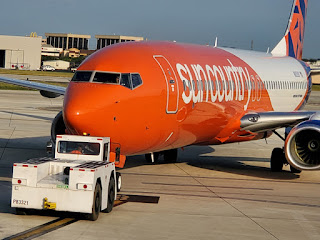 Led by General Manager Zach Jackson, the crew at San Antonio International Airport (SAT) was recently recognized in Sun Country Airlines’ newsletter. During October, the SAT team missed 0 bags out of 1677 during operations. The SAT also placed first in missed baggage in the entire country. Congratulations, Zach and the SAT team!

Flight Services & Systems (FSS) was excited to welcome Silver Airways to our Charleston International Airport (CHS) station. The first flight was on November 23rd and according to COO and CCO Phil Armstrong, the flight and operations couldn’t have gone smoother. Leading up to the startup, FSS spent a few weeks hiring and training our new employees to ensure things would go off without a hitch. Congratulations to our CHS team and welcome to Charleston, Silver Airways!

We also welcomed Bahamasair back to our Palm Beach International Airport (PBI) location. Flights with Bahamasair were halted due to COVID-19. Bahamasair is no stranger to PBI but was new to the FSS family. According to General Manager Evian Medrano, the November 29th startup went as anticipated. Fantastic job by our PBI crew and welcome back to Palm Beach, Bahamasair!

Flight Service & Systems (FSS) is thrilled to announce that Freddy Medina has been hired as Operations Manager for our upcoming Jacksonville International Airport (JAX) operation.

Freddy comes to FSS with over 16 years of experience in facilitating airline ground operations. He started his career as a Customer Service Agent for British Airways at JFK International Airport. While there, Freddy worked as a line trainer, turn-around and ramp safety coordinator, and a third-party duty manager. He is also accomplished in enhancing airline operations through process improvement, internal audits, and staff development.

He will be overseeing our Silver Airways operation in Jacksonville starting later this month. Freddy has a degree in Business Administrations from Borough of Manhattan Community College. Welcome aboard, Freddy!

We would also like to welcome Barbara Balcar to the FSS team. Barbara is our new Human Resources Manager. She comes to FSS with over 10 years of experience in the Human Resources field, with 4 of those years being in the aviation industry. Before coming to FSS, Barbara was Human Resources Manager for QuickFlight. During her time there, she ensured FAA and legal compliance as well as compliance with company policy. She also developed programs to enhance employee relations. Welcome aboard, Barbara!
Joining the FSS team is Jill Ellison. Jill is our new Staff Accountant. New to the aviation industry, Jill comes to FSS with 20 years of experience in accounting. Her areas of expertise are financials, payroll, financial analytics, and month-end close as well as compliance and human resources. Jill graduated from Kent State University Magna Cum Laude with a bachelor’s degree in Accounting. Welcome aboard, Jill!