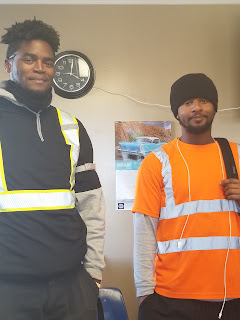 Flight Services & Systems would like to recognize Nelson Doubarere (left) and Taylor Samuels (right) for reporting suspicious behavior. During a British Airways flight operation on January 17th, 2020 at Louis Armstrong New Orleans International Airport (MSY), Taylor noticed ground handlers from a neighboring airline near the baggage cart. While it is not unusual to have ground handlers near the gate during a British Airways flight, it was their location to the baggage cart that first tipped Taylor off. He witnessed them throw something into the baggage cart. Upon inspecting the baggage cart, Taylor notified Nelson of the incident. Nelson also inspected the baggage cart and notified AVCOM and FSS General Manager, Jennifer Ferstl, of the incident. The package ended up being of interest to law enforcement officers and they were called on the scene to remove the package. Flight Services & Systems would like to thank Nelson and Taylor for their efforts in aviation safety and security.